The current model of chemistry and physics includes the hypothesis that shortly after the 'Big Bang' gamma rays collided to form protons and anti-protons.
A problem with this model is the anti-protons are missing. I have a different hypothesis, through fractal transformation and the future being connected to the present and the present being connected to the past, the missing anti-protons are electrons and quarks.
I also believe this model requires particles to have clock rates.
I consider the universe to be a particle with a clock rate composed of particles with faster clock rates composed of partcles with faster clock rates.... Furthermore I consider time dilation and time contraction to be references to present and future clock rate instant ratios. Acceleration reperesents change in the ratio of future to present instants not slowing of a clock rate.
I also believe that a light wave is a sequence of the possible future locations of a photon.
Scientist believe the smallest instant of time of our universe is the Planck instant. The clock rate of an electron must be faster than clock rate of the universe because light exists as waves in this universe and is perceived as a particle (and a color) when it alters the orbital of an electron. Electrons are composed of photons.

On this web page I hope to develop a fractal time sequence for protons and neutrons (baryons) that explains the electron orbitals and the orderly arrangement of the periodic table. 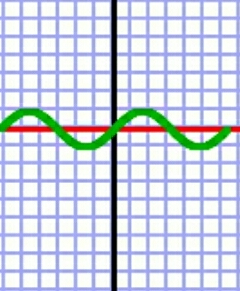 
The the above graphic is a sine wave. It might represent a electromagnetic wave such as a gamma wave.
The sine wave above is on a X,Y axes. When plotting electromagnetic waves the X axes typically represents units of time. As you move along the the X axes, which is the arrow of time, the sine wave wave rises and falls above 0 on the Y axes. Above 0 is + electric charge with regards to electromagnet waves and below 0 is negative.
Can quarks be transormed into electrons, and is that the missing mass of the universe?

If you move your finger around the unit circle and follow the lines to Y axis you can plot a sine wave.

Einstein's theory of space time does not include universal clock rates. At the time of the 'Big Bang' there was no mass in the universe but there must have been a clock rate or there could not have been gamma rays!
Additionally I find clock rates essential for the fractal transformation.

My understanding of fractals is this...
There is an overarching fractal topography, a transformation applied to that topography and than repeated perhaps infinitely (a loop).
I surmise that the strong and weak forces of physics represents the breaking of fractal loops. And the orbitals represent future possible locations for the transformed anti-proton. The anti-proton is an electron that was a valence quark that underwent a fractal transformation.

Among the particles that exist in protons and neutrons are six types of quarks.
There are two charged quarks, known as valence quarks. The Up Quark has +2/3 charge and the Down Quark which has -1/3 charge.
A proton has two Up Quarks and one Down Quark. The neutron has two Down Quarks and one Up Quark. If the proton and neutron appeared and their Quark sequences were Up, Down, Up, Down, Up, Down, that pattern would be similar to a sine wave. Non charged Quarks could be sequenced between the appearance of charged Quarks and the up down up down sine wave pattern could be maintained.

In order for there to be change, matter must spend a number of instances in the future before returning to the present. If this process is disrupted this future time period might escape the confines of the proton and its clock rate to become a orbital, a transfomed region of space and time with the probability of the appearance of a transformed quark.

I Speculate...
There are three time states. The past which I believe does not exist in this universe but only the mind of God. The future which exist as possible locations of matter in space for specific instants of time. And the present which is entangled with past. Matter exists in the present for a specific instant in specific area of space. Matter in the future exists as only possible locations. The electron is a fractal transformation of a anti-proton via Quark, the electron orbital is its possible location.
As mentioned elsewhere particles within particles have faster clock rates. Different clock rates effect mass, speed and distance.

Students of chemistry use the periodic table to determine the orbitals of electrons of the atoms in the molocules that are interested in. These are layered structures with the atoms nucleus at the center.
These orbitals are...
Nucleus
1S
2S & 2P
3S & 3P & 3D
4S & 4P & 4D & 4F
....
Notice that the blocks of the Periodic Table have the same letters as the electron orbitals. The periodic table can aid in determining electron configuration.


Oxygen Electron Orbitals
On the above periodic tabe the rows are periods. O is not the eight ball. On the periodic table its symbol is O and its atomic number is 8. It is in p, block row 1 column 4. To find the electron configuration for Oxygen. Write down the last entry in the periods until arriving at oxygen. Oxygen=s1[2],s2[2],p2[4]. That is a total of eight electrons. The s period has 2 columns. The first row of the s period has 2 columns hence s1[2]. The second row of the s block has still has 2 columns hence s2[2].
Follow the second row to the p block, count in 4 columns p2[4] (0xygen has eight electrons). That is Oxygen's place on the periodic table. That is how to use the periodic table to determine what orbitals electrons have the probability of being located in but additional logic is required to determine the electrons quantum numbers.

I do not guarantee my periodic table or my physics or my chemistry to be accurate.

The electrons have quantum numbers. These numbers are critical for an understanding of chemistry and hopefully the they will useful when I attempt to write a fractal simulation of the periodic table.
This web page is in part an an attempt to develop an algorithm explaining fractal space and time.

m(sub)s...spin of electron. This refers to its sign on the sine wave and hence the magnetic orientation. Real electrons occupy orbitals. The spin suggests some type of synchronization so only one electron exists in a particular orbital in an instant (sub-instant?).

The atoms of table salt can share electrons. Can protons and neutrons share quarks? Helium has one up electron and one down electron in the s2 suborbital.
If the neutron sequence ends with an Up quark is it shared with a proton or transformed to an up electron? It would simplify the algorithm if up and down quark names correlated with electron spin. I can't help but think hydrogen is a section of sine wave, helium is two or four sections. What are the fractal transformations?


Hydrogen has one up electron in the s1 orbital. Perhaps it is a transformed anti-proton.

Perhaps it is fractaly transformed Up Quark. According to the article bellow the valence quarks of a proton make up less than 2% of a protons mass.

I believe the particles of an atom appear in sequence. I also believe in fractal space and time. Space and time is divided fractaly. How? Plus and Minus, Top and Bottom, Tick and Tock. And in sequence!
Perhaps when a particle is in the present it is entangled with the past.
To arrange the periodic table I don't think I need to go deeper than the valence quarks.
The proton =up quark, down quark, up quark
The neutron= down quark, up quark, down quark
The quarks appear in sequence. Some will be transformed into electrons. The up or down of the quark correlates to the electrons spin, which correlates to the electric + or - electric charge which inturn correlates to atoms magnetic fields.
This is because the elements are fractal transformations of gamma rays.

Hydrogen fractal seqence?
proton 1
1.) up quark
2.) down quark
3.) up quark transformed into an up electron in the s1 orbital.

As mentioned previously there are three states of time. The past, the present and the future. The time states are divided by instances. The length of instant depends on the clock rate.
There are clocks within clocks like there particles within particles. I believe that a suborbital is the future location of a quark that has had a disruption in its fractal sequence. Atoms are quantum entangled particles with its information stored in the past.
In addition, up electrons only have the possibility of existing in + instances, and down spin electrons only have the possibility of existing in - instances, tick tock. That would explain why they have opposite charges yet don't interfere with one another.
If the speed of a strobe light is fast enough we do not perceive the strobe effect. Light is + and -.
Perhaps instances are composed of + and - subinstances. Is our view of the universe a fractal stroboscopic illusion?

This sequence or something similar has the correct number of protons and neutrons, the correct electrons in the s1 orbital and additionally the up down quark pattern may be a fractal reflection of the initial gamma rays of the big bang!

Modern physics suggests the order of creation of the elements does not match the periodic table order. Lithium number three on periodic table evidently is created by nuclear fusion in exploding stars. The current model for the creation of the elements is Hydrogen, Helium, Carbon, Neon, Oxygen, Silicon, Iron and then the star explodes creating more elements. That order is quite different from the order of the peridic table.
Neutrons can only exist for about fifteen minutes outside a nucleus of an atom, it then splits into a proton and a electron. The combined mass of the proton and the electron is significantly greater than the mass of a neutron. I consider that to be evidence of a faster clock rate within the baryon! The fact that the neutron splits into a proton and a electron suggests a fractal model.
I believe in the model I have presented and I will try to continue fractal sequence on a different webpage in the future...


Atoms are created in stars, they are quantum entangled particles. It is my opinion that space and time are fractal and stroboscopic.
The universe is a place of random probabilities and disorder. Without the random probabilities of the universe I doubt human beings would have freewill.
The disorder of the universe gives us the ability to make choices.
And yet out of the disorder of universe comes the order of the Periodic Table.